Ok, this has been bugging me for at least 12 years. I forgot about it but was just reminded again after I went to a local Pow Wow here.. “Indian Tacos.”  Listen, Tacos are already Indian ok. Calling them “Indian” tacos is inferring that they are somehow not Native in the first place — which is incorrect.

I’m not gonna go into a lengthy description of the history of tacos, just gonna get right to the point.

Indian tacos to Mexicans are essentially a “fry bread tostada.” Basically, fry bread topped with everything you would have on a taco..meat, lettuce, cheese, tomato, etc.. as you can see here:

Taco (Tlahco) is a Nahuatl Word 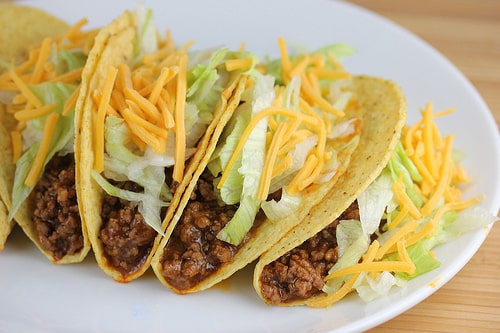 Taco is a Nahuatl (Aztec/Mexica language)  word meaning “half” or “in the middle.” For example to say Good Afternoon you can say Cualli Tacotonalli. The name for the taco derived from the concept of putting the food “in the middle” of the tortilla, which is traditionally called a tlaxcalli (tlosh-kah-lee).

Now back in the day Indigenous Mexicans didnt eat cow, pork, or tripas, etc. Beans, squash, fish, deer, insects, and other such foods were more common. Also on that note we didn’t eat flour (base ingredient in frybread) either. I’ll save the traditional diet specifics for a later post but just wanted to point that out real quick.

FYI I just put the taco bell tacos there to get people mad for not posting “real tacos.” Concept is still the same–delicious goodness in the middle, in the middle.

So let’s call them something else please..

I’m proposing that people who make “Indian Tacos” should start calling them something else like “Navajo (or insert tribal nation here) Tacos.”  I do see some do that from time to time but not often. I think that gesture would be not only more accurate but, more respectful to the native people who originated Tacos.

Speaking of which I’m craving some now..

All your purchases go to help maintaining the website and provide for materials for local Indigenous Education presentations and events. More variety and mens and womens sizes on the shopping page. https://shop.bravo1.la/collections/sixth-sun-ridaz-indigenous/
0Shares
Tacos
Previous PostDistinguishing the Teachings from the TeacherNext PostDecolonizing Aztlan