“May What is Dual Unite to Create”

Ancestors understood Ometeotl as the supreme creative (force) that is beyond our ability to encapsulate and describe. Ometeotl is also the most popular name by which most contemporary Mexicas use to refer to what many would call God. However given the negative and misinterpreted connotations we have come to associate with the Judeo-Christian dominated term “God” we would be misleading ourselves from understanding the profound beauty of our spirituality by simply referring to Ometeotl as (a) God.

Perhaps Ometeotl may be considered “a grand field or force that creates,” a profound (divine) process personified. Make no mistake though, Ometeotl should not be left to the misunderstanding of being a mere static science concept lacking spirit. Consider the profound intelligence and creativeness that we attribute to ourselves and our civilizations, to think the profound creative force that gives us all life is a mere insentient configuration is pretty arrogant.

While Ometeotl may be personified by the word Creator we must also be careful not to think “he/she/it/them” as a person or a singular entity. Although yes, it can be considered a single entity in the sense that we are acknowledging that everything is connected. Single yet multiple at the same time. Contradiction? Yes. that’s Ometeotl too. This is also probably where the idea of “Gods” or polytheism arises from or the alleged fact by critics that there is “no primary source document” referring to Ometeotl. More often the ancestors would mention Tlaloc, Ehekatl, Quetzalcoatl, Huehueteotl, etc. So if Ometeotl was mentioned it would not take place in a special way that would show that Ometeotl was the center of the “religion.”

But more importantly , rather than exhausting ourselves on anthropomorphic ideas and explanations about “God” or  trying to contain the “ever-becoming” into an absolute definition, we should instead focus on the fact that we are referring to a force that is grand, mysterious, and beautiful.

Explaining Ometeotl becomes very difficult when we start trying to fit our living spiritual experience into static western conceptual forms. Western (linear) words concepts dont have the capacity to give our Indigenous (circular) words wisdom the sufficient environment it needs to respectably reflect its depth and  understanding. Even more troublesome when you get non-spiritual people trying to explain spiritual understandings. These academic thinkers tend to only center (material) knowledge derived from western epistemology standards as opposed to a more spiritually balanced knowledge derived from Indigenous centered methodology.  At any rate,  we are relatively stuck with having to use western scientific terms and concepts as our means to shape our expressions about Indigenous spiritual worldview in order for others to explore, understand, and incorporate into their lives.

Here is a breakdown of the meaning of the words that compose the name Ometeotl and what they can denote. Important to understand that Nahuatl is a symbolic, poetic, and yet still a technical language.

Nahuatl words often have layers of meaning and symbolism and thus should not always be taken literally. Often many “Mexica” academics insist on single, rigid definitions and associations. Doing this we can easily choke the life and essence out of a word/concept so just a reminder to everybody that’s not how we roll here.

The following is a listing of general attributes and phrases than can help grasp the essence of Ometeotl:

Ometeotl:  Complimentary Force of Creation, Creator Mother & Father, “May what is Dual Unite to Create”

As you can see, many English words are needed to convey an Indigenous word and they still barely manage to create a respectable  understanding.

Many Ways to Address Creator/Creation in Nahuatl

Ayac Oquipic: Nobody Gave Him/Her/Them Being or Form
In Tona In Tote: Our Mother, Our Father
Ipalnemohuani: The One in Whom We Live and Move and Have Our Being/ The Giver of Life
lhuicahua in Tlalticpaque: The One who Makes the Heavens and the Earth
Yocoyani: Creator of All that Exists.

Just as I would refer to you by using a personalized name, “Steve” for instance, and maybe even addressing you by alternative intimate names like “junior,” or “brother.”  I wouldn’t refer to you as an impersonal objectified conglomerate of biological process (which you are but yet so much more!)  It is the Indigenous way to personify and acknowledge in a warm, personal way what western (linear) worldviews would just coldly and distantly relegate to scientific concepts and processes. These “Gods”/ Deities can be considered personifications of profound processes (technically i could be considered a profound process too..hmm) of the infinite universe and creation. In my simplifying I would refer to them as cosmic relatives but it is also understandable how some would refer to them by the loaded word “Gods”.

From a practical stance I mostly use the name Ometeotl when I am praying (evoking a vision) or have put words or a query out to the “Great Mystery.”  I also interchangeably use the names mentioned earlier. Being that the dominant nation of my family is P’urhepecha from Michoacan I may also use the sacred name Kuricueri (coo-di-ka-we-di). You will find that there are other “Creator/Creation” aspect names with different and particular nuances.

Ometeotl as an Affirmation or Word of Power

From my experience, relatives in Native circles will evoke the sacred name Ometeotl as an affirmation. Example, I might hear an elder speak some wisdom that resonates with me and will nod in agreement and say “Ometeotl” to align myself with the words or vision that have been put into motion.

Before and after one speaks you would evoke the sacred by saying Ometeotl. Examples:
1) Before I speak: “Ometeotl, Tlazocamati..”
2) After I speak: “…Ometeotl.”

It is common to say Ometeotl before and after formally addressing or speaking to people.  By employing the word when you are speaking you are communicating  that you are your being sincere and focused in your words. Saying Ometeotl after you are done expressing yourself indicates to others that not only are you concluding your words but you  are also invoking “the sacred” as witness and co-manifestor to your word.

Ometeotl- The God That Didn’t Exist?

Some critics say Ometeotl never existed and assume that all people who embrace “Ometeotl” believe in “magical non-indigenous thinking”. However, their arguments only deal with the word “Ometeotl” itself as opposed to “the spirit” of what Ometeotl encompasses. Because the word Ometeotl allegedly cannot  be “traced back to any primary source documents” they dismiss this beautiful understanding all together. If focused on (western) academic correctness and such epistemology standards  you will be in for a never ending debate about the origin of the word and which Eurocentric term is best to capture Indigenous concept. But as far as the qualities that we attribute to Ometeotl (duality, balance, generation) there seems to be little dispute on the existence and frequency of those concepts  in Nahua/Mexica spiritual-sciences.

Obviously linguistics, semantics, politics and even ego-disputes can make things way more complicated but it is advised not to waste  energy on intellectual battles (which are mostly ego-based). Instead invest time and energy in creating and making meaningful words from your Nahuatl language to express and understand your world and lift your people. Become the living experience by which we bring the power and beauty of our ancestors into our life through the way we live. Your direct experience supersedes everything else. 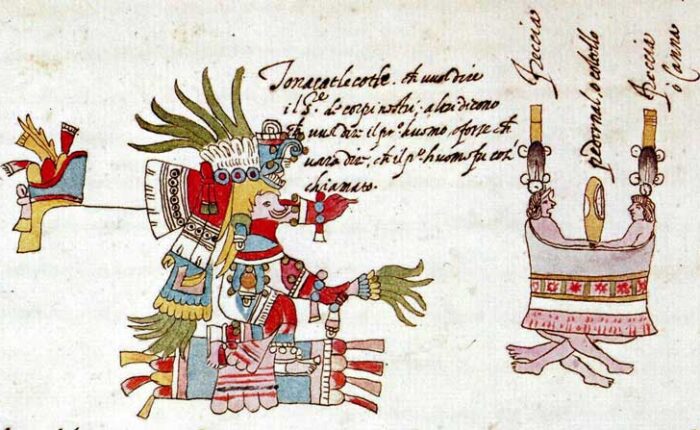 A Defense of Ometeotl by David Bowles