This is a good Twitter thread on the topic of Ometeotl posted by David Bowles. While not necessarily feeling his final definitions or proving that the name Ometeotl was used in convention, it does show that it is within reason that Ometeotl as a description and word existed and is not a clear cut “new-age invention” as many are quick to swallow. It’s disappointing that just because someone posts and articulate article with a bibliography people automatically assume the conclusion to be true. As an autodidact who has been studying and putting Indigenous knowledge and teachings to practical, community self-determination use I feel it is duty to present comprehensive considerations. 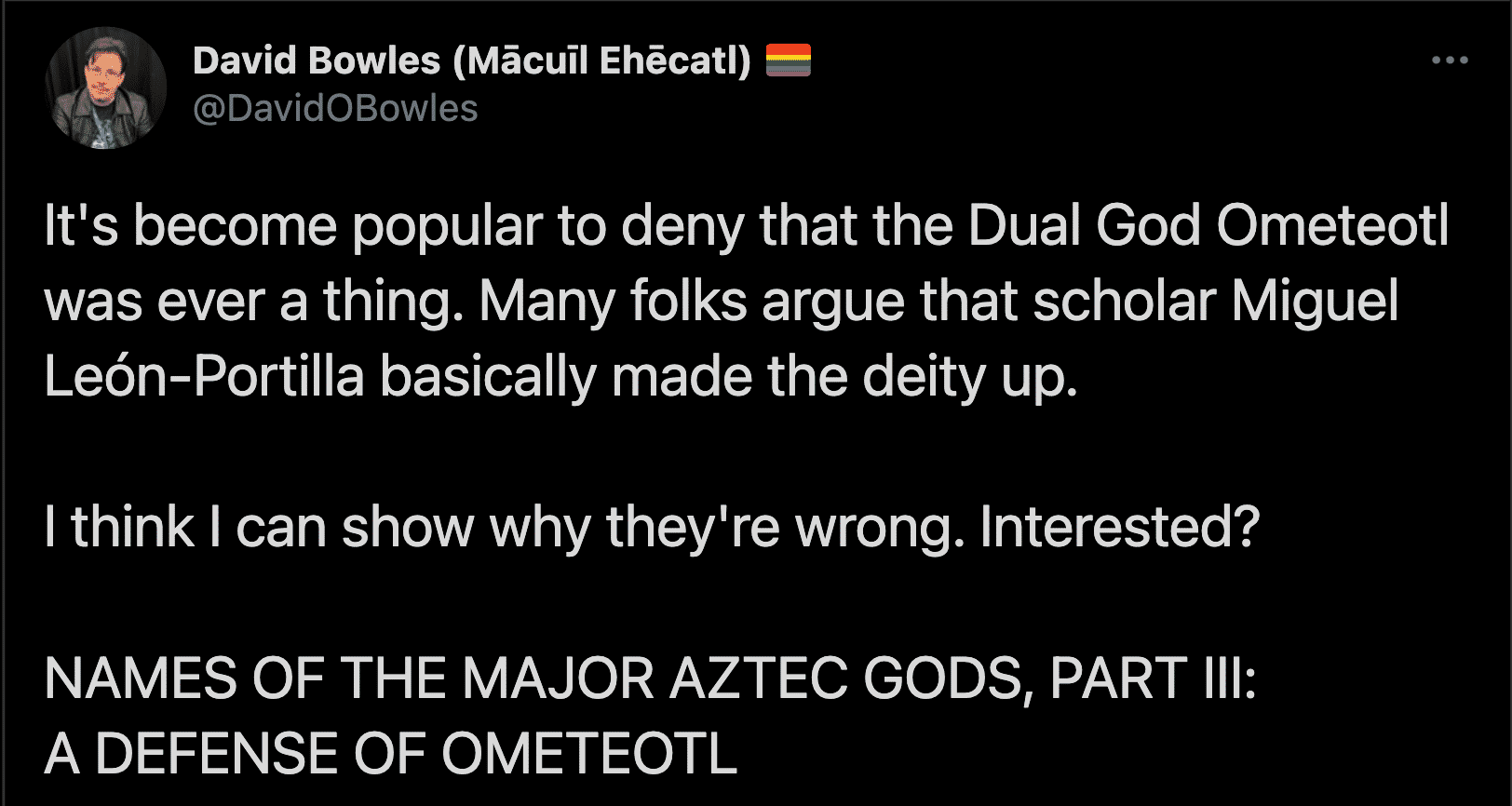 It’s become popular to deny that the Dual God Ometeotl was ever a thing. Many folks argue that scholar Miguel León-Portilla basically made the deity up. I think I can show why they’re wrong. Interested? ..

NAMES OF THE MAJOR AZTEC GODS, PART III: A DEFENSE OF OMETEOTL

So you can grasp my argument, I need to teach you a BUNCH of stuff, so strap in. This will be a doozy. As a preamble, you should know that duality plays a huge role in many indigenous Mesoamerican religions. Both K’iche’ Maya & Nahua texts feature creator dyads, for example.

The Maya dyads often share one basic name, prefixed with “one” and “seven” as individuals to signal that they are two-in-one. Hun Kame & Wukub Kame (death gods). Hun Hunahpu & Wukub Hunahpu (corn gods … with Hun being generative and Wukub being a sort of sterile helper).

From the Codex Chimalpopoca, we know that Toltec King Ce Ācatl (considered the incarnation of Quetzalcoatl) along with his sister Quetzalpetlatl worshipped a series of divine dyads, including the following:

Plus another pair that we’ll come to later. If you read the other two threads, you’ve seen more examples of these male/female aspect pairs.

But individual gods THEMSELVES were often seen as dual (m/f). Here are some quotes:

“in tonān, in totah, in tōnatiuh” – Our mother, our father, the Sun.

“in tonān, in totah in Mictlāntēuctli” – Our mother, our father, the Dead Land Lord.

“in tonān in totah in tlāltēuctli” – Our mother, our father, the Earth Goddess

“in tonān in totah in yohualtēuctli” – Our mother, our father, the Night Lord.

This dual parental role extends to the being that gave rise to the gods themselves:

When Christians came along, they appropriated the parental dyad for their upstart deity, as well:

“That one, God, our true mother and father.”

There were many other dualities beyond just male and female. Nearly every deity in the pantheon is part of a complementary pair with another. Chaos & Order Youth/beauty & Age/ugliness Sun & Moon Southern & Northern Stars

Another thread in the pervasive sense of duality underlying Mesoamerican religion is the notion of the Nāhual, the shadow or animal self, the double. In addition to mages (nāhualtin or wayo’ob … the latter the Maya equivalent), gods themselves had shadow selves.

god of fire Cuāuhnōchtli (an eagle perched on a cactus) – double of Huitzilopochtli, god of war & the sun

One way of knowing whether a group of people thought about or discussed a concept is whether there exists a term for that concept. In Classical Nahuatl, the word for “duality” was “ōmetiliztli.” It comes from “ōme” (two) and the nominalizing suffix -tiliztli. Two-ness.

Another way of constructing the word “duality” would be with the suffix for abstract nouns, -yōtl. That would give us “ōmeyōtl,” duality. Now, that particular word isn’t recorded, but a derivative of it is: “Ōmeyōcān.” That “-cān” is a locative. “Place of Duality.”

What is this oddly named region? The Codex Chimalpopoca (4:46-48) describes Ce Ācatl (Quetzalcoatl’s incarnation, remember?) crying out to Ōmeyōcān, where the dyads mentioned above (and the last one, to be discussed below) heard his prayers and kept him humble:

“As they knew, he cried out to the Place of Duality, above the multi-tiered heavens, which is how the sky is arranged. And those who dwelled there, they knew that he called out to them, that he prayed to them, behaving with great humility and mourning.”

What else do sources tell us about the Place of Duality? In a discussion of the soul of a newborn infant, we learn “ca ōyōcōlōc in topan in ōmeyōcān in chiucnāuhnepaniuhcān” – “it is created above us, in the Place of Duality, above the multi-tiered heavens.” Soul origin.

“They sip from the Flowers of Abundance– they live beside the Tree of Abundance.” That celestial bower is also known as Chīchihualcuahuitl, the Nursing Tree (as babies’ souls are nourished from its flowers). The Place of Duality has another epithet: “in Tōnacātēuctli īchān” or “the Home of Tōnacātēuctli.”

That epithet brings me to the fourth dyad that Ce Ācatl Quetzalcōātl & his sister were said to worship, inhabitants of the Ōmeyōcān that the king cried out to: Tōnacātēuctli and Tōnacācihuātl. Their names bear some close scrutiny. You may have read my explanation of tōna..

It’s an impersonal verb meaning “to be warm/sunny.” Without the sun, there is no food, no earthly bounty. So “tōnac” means “abundance” (with the implication that this is bountiful sustenance). Tōna also gives rise to the noun “tōnalli,” which can mean “warmth,” but also “day” or “day sign” (from the sacred calendar), and as a result “destiny” (as determined by the sign of one’s day of birth). Tōnalli can also mean “soul.”

As a result, while this dyad’s names are “Abundance Lord & Abundance Lady,” there’s greater nuance.

They rule over the place where our souls emerge & await birth. They are the source of our destiny. The codex “Historia de los Mexicanos por sus pinturas” (History of the Mexica through their Paintings) names this couple as the sole inhabitants of the uppermost heaven.

Book Six of the Florentine Codex affirms that Tōnacatēuctli and Tōnacacihuātl are epithets of gods more properly named “in ōmetēuctli in ōmecihuātl.” Literally “Two Lady” and “Two Lord.” Ruling in the Place of Duality.

One being. Singular second person constructions. Two names, connected with duality. We can see that this is a 2-in-1 deity.

“Okay, David, I follow you up to this point,” my opponents will surely say. “But there’s no evidence people referred to this dyad with a single name. No one called it ‘Ōmeteōtl,’ sorry.”

Let’s take a look. Admittedly, we have a fragmented set of sources. Much was lost.

One source is Cantares Mexicanos, the larger of the two surviving collections of Aztec cuīcatl (songs). It consists of 85 folios on which 91 cuīcatl were compiled in Nahuatl using Roman script somewhere around 1585. Transcribers and copyists edited these songs, of course.

One thing they did (it appears) was delete the names of indigenous deities, replacing them with “yehhuā” or “yehhuān” (s/he or they). Sometimes the word “Dios” [God] would be inserted as a gloss, retroactively making sacred songs center on the Christian deity.

In one of the songs, the narrator asks where he can go, since “ōme ihcac yehhuān.” “Ihcac” is “to stand” in the 3rd-person singular. “Yehhuān” is glossed “Dios,” so a literal translation would be “Two stands, them, God.” More idiomatic: “They, God, stand double.”

And in a hymn transcribed in the Historia Tolteca-Chichimeca, we get this double-standing god’s name. The sacred song contains the following line:

That … seems pretty clear to me.

The second (and final) appearance of this name comes in the Codex Ríos: above an image of a god, a colonial hand has affixed the label “hometeule.” A close comparison shows that this icon of “Hometeule” is nearly identical to Tōnacatēuctli (as one would expect).

“Hometeule” is clearly a Spanish-speaker’s phonetic transcription of “Ōmeteōtl.” Seen within broad, pervasive pattern of duality, it’s VERY credible that the dyad in Ōmeyōcān, in addition to their individual identities as Ōmecihuātl & Ōmetēuctli, would be known as Ōmeteotl.

“Two God” in the “Two-ness Place.” A Dual God in the Place of Duality. Above the heavens. Giving rise to human souls. Nourishing the souls of children who pass before their time until they can be reborn. Source of our bountiful sustenance. Arbiters of our fates.