aka Thoughts on Indigeneity from Another Indigenous Person

The reason I’m even touching on these deficient critiques of recent virality about Chicanx  is because there are a lot of our Ndgns youngsters  trying to find confidence and stability in their Indigenous selves in the midst of ethnocentric attacks on their Native identity and spirit in this white supremacist society who might be led astray by this.

These two recent articles are How the Chican@ Discourse Silences Indigenous Peoples from Mexico + Central Americans and coming in a  couple days after that one,  My Thoughts on Indigeneity, as an Indigenous Person. I’ve seen some of these type critics around before. These non-Mexicans or non-Chicanx disgruntled with how some Mexicans or Chicanos might have treated them and now make it a thing to hate on anything Chicanx or Mexican. 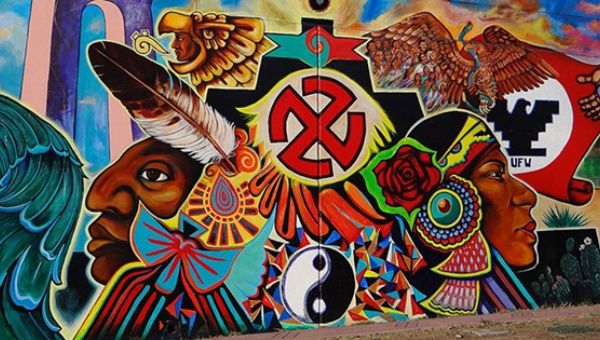 I get it. To a point. They have grievances and maybe don’t know how to be constructive about. But these Native critics with their more competent Indigenous self awareness are pushing this harmful concept that there’s  a difference between an Indigenous Person and a Person of Indigenous Descent.  It basically denies those of us Indigenous Mexicans healing and recovering ourselves of our Indigenous identity.   Some of these critics apparently have some status in academia so I guess they feel their word has more legitimacy.

This concept is problematic because those who are not yet confident in their Indigenous selves might actually believe these critics’ condescending commands and flawed logic. I can’t go through their every point  but suffice it to say it’s full of generalizations and vagueness. To note a few things: They make a lot of claims but don’t define much (for instance what “taking up Indigenous spaces” actually looks like); they conflate Latinx, Chicanx, and Mexica;  they have a condescending tone to their pieces; and they have a weird notion that somehow us  so called “Indigenous Descendants” are not fighting for our existence in our communities on the daily. As if the average Mexican in the U.S. experience hasn’t also been taught to be ashamed of themselves and faced discrimination for the same looks, or for their language, mannerisms, etc.

You can read the articles for yourself, they are not too long. You can also read my reply to the first one put out by the sister Jessica Hernandez that awarded me a twitter bashing and a flurry of unmerited labels which I won’t get into.  I’m trying to be considerate that maybe these are young people in college probably dealing with other Mexican/Central Americans who are just coming back into awareness of their Indigeneity and maybe as people having that awareness all their life it might be bothersome to them.  I’m really trying to listen despite their mostly immature behavior but they are adults and they are being concerted, bold, and are very conscious of what buttons theyre pressing.

The core grief I’m hearing is that Chicanx/Mexicas who these more-Ndgns-than-thou critics are united in labeling as “indigenous descendants” shouldn’t take up spaces for “Indigenous people.” I take their term “indigenous descendants” to be their pejorative  way of referring to Chicanx  who are just coming back into awareness of their Indigeneity, because that is probably who they’re dealing with in their social environment. I take their “indigenous person” label to mean anyone from Mexico that has had awareness of their Indigeneity all their life and can claim citizenship to a native community that still maintains a form of traditional social structure— basically conflating indigeneity with tribal citizenship.

They do have some merit in their issues with people “taking up spaces” but they don’t differentiate what type of Chicanx they’re referring to or exactly what that looks like.  We all know there are those White Mexican (true Latinos) who usurp PoC identity just because they are Mexican by nationality that take up spaces for Brown people, and yes there are still plenty of “Mexicas” who forget to acknowledge and give proper dues to the caretakers of the Native territory in which they reside.  But, while barely brushing on some valid issues their points get lost in pushing their condescending concept of us not being indigenous people and competing in oppression Olympics. Chican@s in the United States get killed, incarcerated, and deal with ongoing intensities of ethnocide every day. Are we not truly indigenous because we dont all face the exact same experiences and types of white supremacy assaults?

I think there’s a real discussion to be had but their condescending and immature approach doesn’t encourage dialogue. It helps even less when one of your main champions and concept promoters is a Salvi dude who likes to draw caricatures of himself a lot lighter than he actually is and has made hating on anything Mexican/Chicanx one his trademarks. Too much projecting and not enough logic.

The Chican@ community is by no means beyond reproach and being such a large group of people it is understandable that other groups of Native people who might not having a coherent understanding of who are will exhibit impatience with us as we collectively come back in tune with our Indigeneity.  We need to protect our people and future generations these types of assaults on our identity. “Kill the Indian. Save the Man” was the colonizer’s job.  How other Indigenous people claiming to be about Indigenous empowerment and unity become the ones doing the colonizers work is both baffling and disturbing.

Yes. Let’s have a conversation about how to better respect and understand each other as Indigenous people in different experiences. Ndgns to Ndgns, just don’t come with that belittling colonizer hater bullshit.